The 6 guys behind AnyLogic 6

Meet the XJ Technologies development team! Normally we don't let them out much (that's why they're squinting in this unaccustomed daylight scene). We like to keep them in their chairs. Working long quiet hours. Not bothering anybody much. Every once in a while we give 'em a free t-shirt. 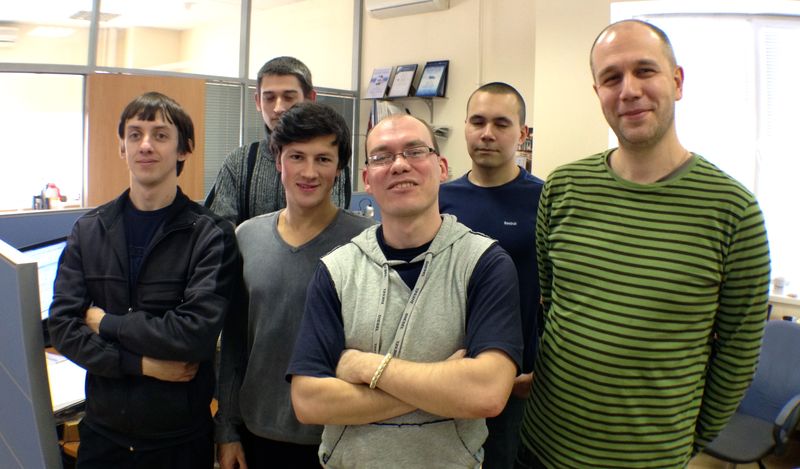 George is the happy fellow in the prison shirt on the right. As Exalted Cheif Developer his main job is to take credit and distribute blame. You know, like management everywhere. His favorite desk toy is a calendar printed on a sheet of rubber so he can keep pulling planned release dates further back.

The extremely uncomfortable looking fellow on the left is Nickolai. He loves geeky electronics and risky sports. Posing for photos... not so much. Considered the most valuable person in XJ. And we keep saying things like that to him so we don't have to pay him more.

Next is Sergey who is so secretive about his private life I can do nothing but make things up to fill space. Let's see... ex-Spetnatz commando, has a pet Teddy Bear named "Chuckles", once beat a ninja and took his pants and has promised never to take them off.

Third from left is Andrey. You know, the sporty type. Does Yoga and football a lot to compensate for all the other geeks who never stop coding. Personally responsible for 12% of the IM traffic in and out of St Petersburg.

Ilja (the one belligerently crossing his arms... thought the photographer had voted for Putin). He loves alternative European movies and is an expert in them. Which is easy since only 5 or 6 people ever see the kinds of movies he likes. He drums his legs while working. We're trying to develop a power take-off system based on this perpetual motion to drive some fans in the office.

Ivan, dozing on the right, is conducting an long-term experiment on the effects of only eating nuts and chocolate. The results are mixed. He writes code well but forgets how to speak for long periods of time. His colleagues are amused by his origami --- little do they know he is secretly folding nasty poems about them in German.

So there they are. The crack developers who are hard at work bringing you AnyLogic 7 sometime this summer. When's that release date, George?