Cancer progresses through the spread of invasive malignant cells causing normal cells to decrease in proportions. The main reasons for these phenotypes are genetic mutations, but surrounding cells and microenvironments add to the inclination towards certain phenotypes. Game theory is a series of mathematical analyses that allow for the prediction of situations based on the outcomes of interactions between “players”. The game theory can be applied to biological situations in the sense that they can attempt to predict the proportions of the phenotypes of cells after biological. The purpose of this experiment was to determine if interactions between cells had an effect on the phenotypic outcomes using the game theory.


In this experiment, game theory was used to assess the interactions between three cell phenotypes usually found in cancer. The three defined cells were autonomous growth cells, invasive and motile malignant cells, and cells that performed anaerobic glycolysis. Based on preset variables in the payoff matrix, analytical equations were deduced that allowed for the analysis of the proportion of autonomous growth and malignant cells in a tumor. AnyLogic was also used to simulate the interactions between cancerous and normal cells.


It was found that malignant phenotypes were more likely to appear in a tumor that contained high amounts of the phenotype of glycolytic cells. Inversely, autonomous growth cells were seen to decrease as the increase of glycolytic cell phenotypes was exhibited. This experiment could be elaborated on by increasing the number of phenotypes that interact within a tumor to add more applicable results to the real world. 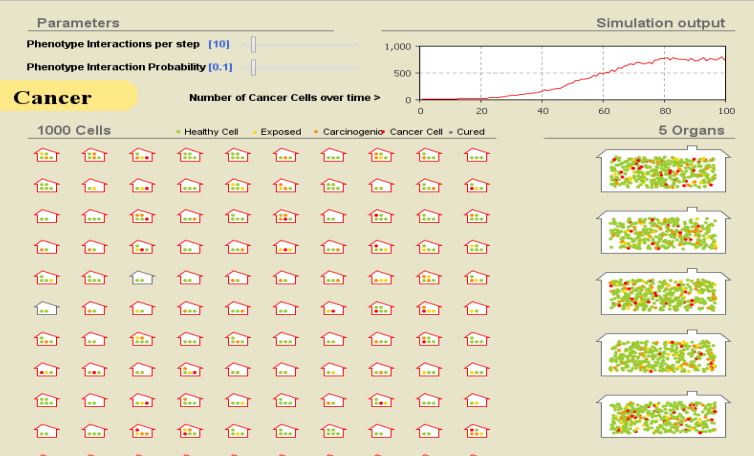